Konfig is a monorepo that stores configurations about operation intentions mainly described by KCL. Users can write configuration (config), type (schema), function (lambda) and policy (rule) through the record and functional language KCL. Konfig provides an out-of-the-box cloud-native application model, allowing users to quickly start the journey of cloud-native delivery. Developers can write base models and application models through KCL's modular language features, which helps the platform side quickly reveal capabilities through "building blocks", and application developers can define application models as needed.

Konfig repository is a unified programming interface for all operation scenarios and is a cooperation workspace for application developers, platform developers and SREs.

The overall structure of the configuration library is as follows: 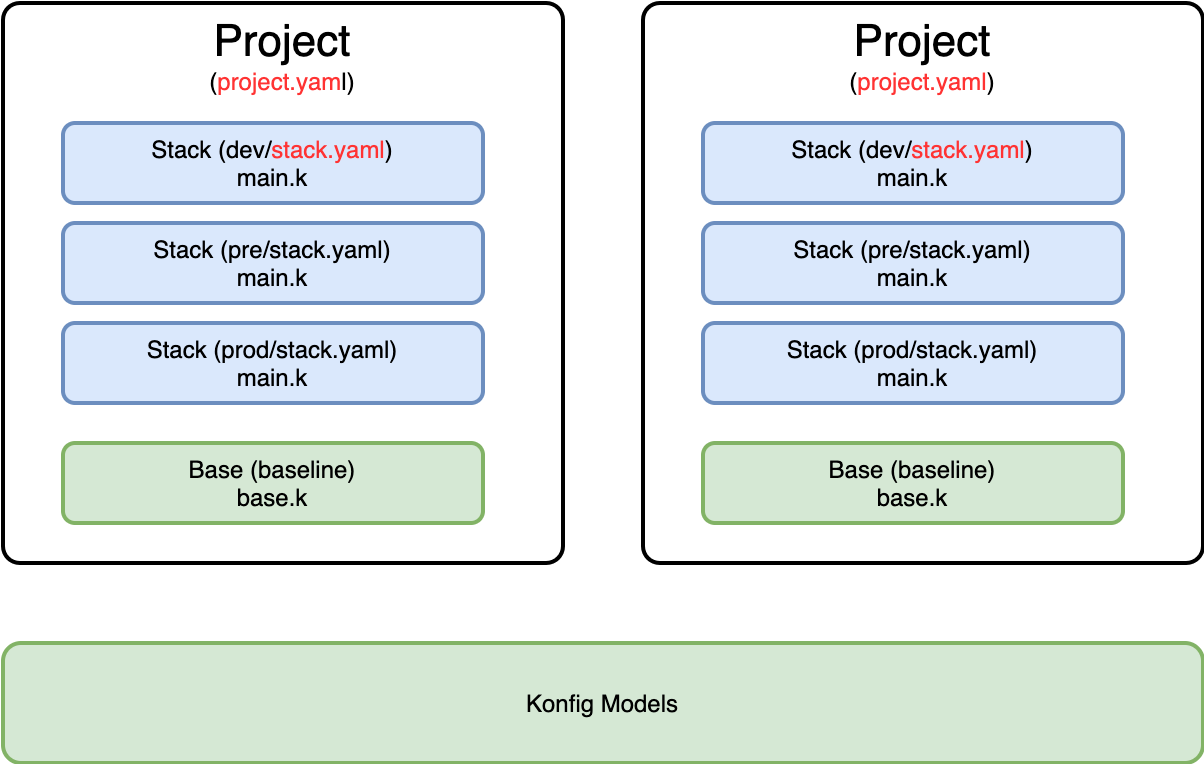 Project and Stack are logical isolation concepts used to orginize the Konfig.

Any folder that contains the file project.yaml will be regarded as a Project, and the project.yaml is used to describe the metadata of this Project like name and tenant. Projects must have clear business semantics and must belong to a tenant. Users can map an application or an operation scenario to a Project.

Like Project, any folder that contains the file stack.yaml will be regarded as a Stack and stack.yaml is used to describe the metadata of this Stack. Stack is a set of .k files that represents the smallest operation unit that can be configured and deployed individually. It tends to represent different stages in the CI/CD process, such as dev, gray, prod, etc.

Relationship between Project and Stack​

A Project contains one or more Stacks, and a Stack must belong to and can only belong to one Project. Users can interpret the meaning of Project and Stack according to their own needs and flexibly organize the Konfig structure. We provide the following example as a best practice according to our experiences:

The Project represents an application and Stack represents different environments of this application, such as dev, pre and prod, etc. Common configurations can be stored in a base directory under this Project.